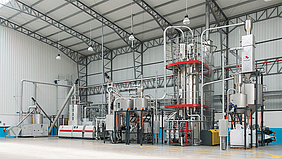 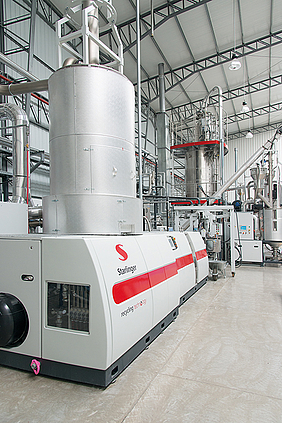 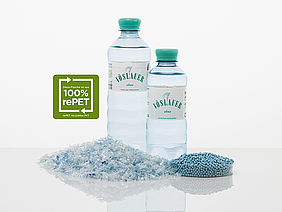 Vöslauer bottles made from 100% rePET.

These days, everyone is talking about "the circular economy". The term may not yet have an entry in many dictionaries, but an internet query yields over 5 million results, not counting translations into other languages. But what does this buzzword - which is used in many fields besides the plastics industry - actually mean? Mostly, people talk about recycling, about collection and reprocessing instead of single usage and disposal. So far, so good. But strictly speaking, circular economy must mean that our resources are managed in a closed circle. The manufacturer's product is bought by the end consumer, who deposits it in a collection system after usage; it is then recycled and delivered to the manufacturer, who uses the recycled material to make new products: the cycle begins anew. However, this is not always the case. Frequently, plastics such as PET bottles are collected and recycled, but eventually they are used to make different products such as fibres or PET trays. Even though this means that these bottles are reused, this form of recycling does not correspond to the ideal of a 100% closed circle.

The PET bottle is often referred to as the prime example of a functioning circular economy. Several European states such as Norway, Sweden and Finland have already implemented bottle deposit-refund systems, which guarantee high collection rates. In Germany, where such a system has been introduced in the year 2003, the recycling rate of PET bottles has reached an impressive 93% fourteen years later, and for single-use bottles subject to deposit-refund, this number was even higher with 97.3%. The recovered secondary raw materials went into the production of new beverage bottles to 32.6%, into the production of films to 29.4%, into the textile industry to 21.8%, and into other applications to 16.2% [1]. In other European countries, a growing demand for recycled material is facing a relatively low collection rate, which is why British supermarket chains are currently in the process of testing deposit-refund systems, and some countries such as France or Spain are debating the introduction of such a system. If there is a collection system in place, and the population shows highly responsible behaviour, a considerable collection rate can be achieved even without a deposit-refund system: In Austria, already 3 out of 4 bottles are collected in the yellow bin or the yellow sack [2].

The technologies for closed-loop recycling already exist: After shredding, washing, and sorting processes, the PET flakes are turned into regranulate and undergo thorough decontamination on a recycling line (pictures 1+2: the recoSTAR PET iV+ by Starlinger recycling technology). The division Starlinger recycling technology of the Austrian manufacturer Starlinger has installed over 55 bottle-to-bottle PET recycling lines with a total capacity of >550,000 metric tons per year. The lines are available in seven sizes, with a throughput of 150 up to 3,600 kg/h. The cleaning efficiency of such lines meets the strict criteria of various national authorities with regard to food contact (e.g., EFSA - European Food Safety Authority, FDA - US Food and Drug Administration) as well as the quality requirements of major brand owners.
After levelling off in recent years, the demand for PET recycling lines is now booming. For delivery in its financial year 2019, Starlinger recycling technology has already logged orders in the amount of an annual capacity of ~100,000 metric tons, which may partly be attributed to the circular economy package of the European Union.

In principle, EU directive 2018/852 dated 30 May 2018 does not distinguish between different types of plastics. Ergo, the directive states only a single recycling quota to be aimed at, which applies to all types of plastics alike. Moreover, this means that a lower quota in one area can be offset by a higher quota in another area. The ambitious target: 50% until end of 2025, 55% until end of 2030 [3]. On European average, member states need to increase their plastics recycling quota by at least 10% until end of 2025 [4]. Until recently, the guidelines lacked a provision regarding the use of regranulate for the original application in the sense of a circular economy. Likewise, there were no standards or quotas that regulated the proportion of recyclates to be used in new products. This gap is now being closed with a new directive dealing with single-use plastics, which prohibits a range of single-use plastic products such as straws, imposes new measures on a number of other products, and includes an extended producer responsibility. The new directive, which has yet to be taken over into national law by the EU member states, establishes a minimum proportion of recycled materials in beverage bottles of 25% from 2025 and 30% from 2030 onwards. Furthermore, caps and closures will need to be mounted to the containers in the future in order to prevent pollution of the environment. Another new regulation concerns the collection rate for single-use plastic bottles: 77% by 2025 and 90% by 2029. Whereas Germany has already topped this 90% mark, other EU states will have to raise their collection rate significantly over the next 10 years.

Obstacles on the way to a circular economy

To achieve a 100% closed circle, a number of obstacles have to be overcome. Companies see availability of material as the biggest challenge; for the continuous production with secondary raw materials, the supply needs to be ensured in sufficient quantities. This starts with an area-wide collection system, since everything that is not collected can also not be recycled. Also, materials that are collected, but turned into different kinds of products fall out of the closed loop. Yet another obstacle is the attitude of the population towards recycled goods; in the past, recycled materials have often been dismissed as inferior. This image influences the collection morale of each individual as well as the willingness of brand owners to replace primary with secondary raw materials. On the part of the recyclers, there are technical limitations such as material losses through washing and grinding of the PET bottles. An example is PET fines; these are small particles of 1-3 mm in size that occur in the amount of up to 5%. Quite often, recyclers lack the equipment to process these fines into high-quality material, causing it to be used in inferior applications. This situation prompted Starlinger to develop recycling lines for PET fines that take the special characteristics of this material stream into account. Two solutions are possible: processing PET fines jointly with PET flakes, or processing them separately on a special recycling line for fines.

Vöslauer is heading for the 100% mark

For beverage producer Vöslauer Mineralwasser in Bad Vöslau / Austria, circular economy is not just a buzzword, but a company philosophy. Although Vöslauer PET bottles already consist of "rePET" (that's what the company calls the recovered secondary raw materials) to a large extent, this is not enough for the manufacturer: no less than 100% in all of its bottles is the ambitious target, with its implementation planned as quickly as possible. Like many other brand owners, Vöslauer has registered a voluntary self-commitment with the EU that pledges to raise the usage of rePET from 3,300 to 5,500 metric tons within the next years. "We aspire to become better and better, to continue to develop our products, bottles, and packaging including labels and tray films - our principle is to design each product in a more sustainable way than its predecessor", says CEO Birgit Aichinger. "In the last decade, we have repeatedly optimized Vöslauer bottles, labels and caps in view of their recyclability ("design for recycling")", adds CEO Herbert Schlossnikl. As recently as October 2018, the family business called attention to itself as it was the first Austrian company to introduce a bottle made from 100% rePET on the Austrian market; in Germany, the entire product range (except for Vöslauer Balance) was already changed to 100% rePET beginning of 2019. To support these efforts, Vöslauer monitors the amount of material used in production, as a low transport weight ensures a lower carbon footprint. The wholesome concept extends to the entire spectrum: Latest by 2025, all films and labels will consist of 100% recycled material, and beverage crates will enter a recycling loop to 100%.

Vöslauer obtains the recycled material for these ambitious plans from PET to PET Recycling Österreich GmbH located in the Austrian region Burgenland. In the previous year, this recycling site, which Vöslauer has founded jointly with Coca-Cola, Egger, Rauch and Spitz, has processed around 25,400 tons of PET which is equivalent to one billion PET bottles [5]. Since 2010, PET to PET has been operating a Starlinger recoSTAR PET 125 HC iV+ for the recycling of washed and sorted PET flakes. This line raises the molecular weight of rPET to the original level of virgin PET via a process known as polycondensation; as a result, the material maintains its intrinsic viscosity and is therefore suitable for a 100% closed recycling loop. The process also provides extensive decontamination of the material, rendering it suitable for food contact. The individual process steps of the PET to PET recycling line, e.g. drying, extrusion, filtration, and energy recovery, are being optimized continuously in order to achieve the highest possible capacity. Through these measures, the company hopes to better meet the increasing demand for high-quality regranulate.

The good news is that PET bottles already show an excellent recycling rate in many countries. The technologies for closed-loop recycling are available; now the next step is to formulate ambitious targets in combination with legal requirements for collection rates and recycled content in new products. Vöslauer sets a great example: for PET bottles, a fully closed loop is already within reach.

Starlinger: Let our experience work for you!